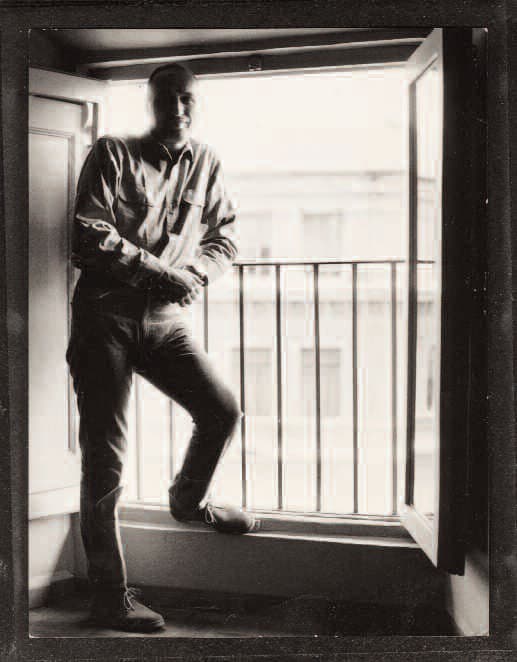 Carlo Battaglia was born on January 28th, 1933 on the island of La Maddalena, but spent his childhood in Genoa. From 1943 to 1947 he lived in La Maddalena, then in Rome. These short years in Sardinia living in solitude left indelible traces in his visual memory.

After a rather wild senior school, he fortuitously entered the Academy of Fine Arts studying scenography. In these years, his attention turned to theater and cinema. In the Academy he discovered painting and, thanks to the lectures by Toti Scialoja, fell in love with contemporary American art. His art history master’s thesis on Jackson Pollock, if published, would have been the first document printed in Italy on the American artist.

After compulsory military service he dedicated himself permanently to painting. Aware of his own mediocre technical talent, he undertook a long apprenticeship, encouraged by the example of his beloved Gorky, reproducing the great masters and especially Matisse. In Italy the only chance to see contemporary paintings at the time was the Venice Biennale. He therefore began to travel: Kassel, Paris and London. To truly understand one must see the execution and dimensions of the original: it is misleading to limit oneself to reproductions. In 1962, he lived for six months in Paris thanks to a painting scholarship.

His true dream, however, remained to be able to see the Matisse exhibitions in New York, St. Petersburg, Baltimore. Having seen and understood those at the MOMA and at the Cone Collection, he could become independent of Matisse’s tutelage. He began to exhibit late, in Rome in 1964, aware that his paintings were still not personal; with the 1966 exhibition at the Salone Annunciata in Milan, he marked his final exorcism. Carlo Battaglia remembered with affection and gratitude Carlo Grossetti who had the courage to exhibit such an obviously unfashionable artist in his avant-garde gallery.

In 1967 he lived for six months in New York, working in a Canal Street studio, and forms binding friendships with Reinhardt, Motherwell and especially Mark Rothko whose studio he frequented daily. Mark had been his guest and of his wife Carla Panicali (whom he married in 1972, after a decade-long relationship) in Rome for two months in 1965. He discovered his true motives and interests: the ambiguity and illusions of the visible world, and illuminated them working on these themes with a series of paintings until exhausting, as far as possible, the idea. Thus he created Misterioso, Vertiginoso, Visionario, examining the relationship between substance and emptiness in the skyscrapers and the sky, the intricacy of reflections on the glass surfaces of the city’s buildings.

In 1970, invited to a personal exhibition at the Venice Biennale, he displayed for the first time Le Maree, a theme that would fascinate him all his life. The ambiguity, illusion, magic of a seascape coincided with his boundless love for the sea.

From the 70’s he participated in all major exhibitions in Italy and in Europe on “New Painting” or “Analytical Painting” as it is also known, feeling however a growing discomfort with theoretical formulations which he no longer shared: nevertheless, he was the most present artist in exhibitions that variously referred  to this genre.

He was present in thematic exhibitions in Venice, Palazzo Grassi 1974, then in Ferrara, Palazzo dei Diamanti, and the Kunsthalle in Düsseldorf 1978. He participated in numerous exhibitions of contemporary Italian art: Selected Paintings and Sculptures, the opening exhibition of the Hirshhorn Museum in Washington 1974, I.C.C. in Antwerp 1975, Aalborg and Odense in Denmark, Boymans Museum in Rotterdam 1977, Hayward Gallery in London, Peter Stuyvesand Collection at the Provincial Museum in Hasselt, Belgium 1982. In Italy, museums in Rome, Milan, Turin, etc. In 1980 he was invited back to a personal exhibition at the Venice Biennale.

Since 1980, he isolated himself more and more, began working with egg tempera, according to ancient Renaissance methods, and divided his time between Rome and New York to finally arrive in La Maddalena, where he could paint in total solitude, watching the sea from the hill of Sualeddu. Searching for the secret structure of the landscape his paintings tended more and more to resemble the appearance of the visible world, not in imitation, but in trying to create a “parallel image.” His themes were those of the sea, rain, hail, the illusion of clouds mixed with the distant coastline. Capturing an image that had already disappeared at the very moment it was imprinted on the retina. Painting as a metaphor of the landscape, landscape as a metaphor for painting. painting was suggestion rather than definition, of the secret meaning of objects, the elusiveness of waves, the depth of distance, the constant illusion of light and shadow.
He died in La Maddalena on January 17th, 2005. On August 4th 2012 his wife Carla Panicali also passed away in La Maddalena, facing the sea they had both so unreservedly loved.

This website uses cookies to improve your experience while you navigate through the website. Out of these, the cookies that are categorized as necessary are stored on your browser as they are essential for the working of basic functionalities of the website. We also use third-party cookies that help us analyze and understand how you use this website. These cookies will be stored in your browser only with your consent. You also have the option to opt-out of these cookies. But opting out of some of these cookies may affect your browsing experience.
SAVE & ACCEPT